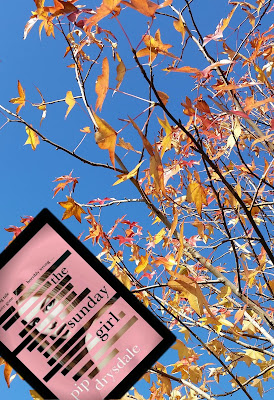 Any woman who’s ever been involved with a bad, bad man and been dumped will understand what it feels like to be broken, broken-hearted and bent on revenge. Taylor Bishop is hurt, angry and wants to destroy Angus Hollingsworth in the way he destroyed her: Insidiously. Irreparably. Like a puzzle, he’d slowly dissembled … stolen a couple of pieces from, and then discarded, knowing that nobody would ever be able to put it back together ever again. So Taylor consulted The Art of War and made a plan. Then she took the next step – one that would change her life forever.

Then things get really out of control – and The Sunday Girl becomes impossible to put down.

There is something irresistibly intriguing about stories of revenge. Admit it – who has not at one point in their lives fantasised about getting even, about getting their own back, even if it’s just directed at the sibling that’s eaten your (no longer) secret stash of lollies or taken a peak at your diary. So when I was offered the chance to read an ARC of The Sunday Girl I felt very excited to indulge the darker side of my psyche.

The premise is not all that different from your usual tale of a jilted woman out for revenge. Taylor is in a turbulent relationship with the much older and sometimes cruel Angus, who she adores for the same mysterious reasons that usually see women remain in dysfunctional relationships despite the agony they cause them. One day Angus, high on drugs, kicks Taylor out for another woman, uploading a private sex tape he has taken of her onto the internet as a parting gift. Jilted, hurt and with her reputation at stake, Taylor swears to get her own back and reclaim her inner tigerwoman. So far, so good. At this stage, I was ready to savour anything that would give Angus his just deserts – the man sounds like a first class a**hole. I particularly enjoyed the way Taylor sets out to forge her plan, using Sun Zu’s book on The Art of War to meticulously plot Angus’ downfall. At this stage, the book was still fun to read, and Taylor is quite the entrepreneur when it comes to making sure that Angus gets a taste of his own medicine. Until Angus comes knocking on Taylor’s door, begging her to take him back. He is remorseful, he has changed, he is a new man – blah-di-blah-di-blah. Taylor, you dimwit, I wanted to shout, don’t fall into this old trap! But she does ....

Overall, I found The Sunday Girl to be a well-written book with some clever and original ideas that had a lot of potential. I really enjoyed some aspects of it, but it ultimately didn’t click with me. Taylor, who originally seemed like a worthy protagonist, made some crappy choices that may be understandable for some, but which didn’t sit well with the story for me and often weren’t grounded in enough reason to make them understandable. For the most part, I felt annoyed at Taylor for stumbling from one bad decision to the next and then whining about it, despite a solid support system of friends and family that would have stood by her. For the most part, her decision-making seemed outlandish and a bit farfetched, and not consistent with the book she quotes as her recipe to exact her revenge. There is a turning point in the story about ¾ into the book that led to a discordant and unsatisfying ending for me.

In summary, I felt that The Sunday Girl was a well-written story with some original concepts that will undoubtedly make a fun read for many. For me, the make-or-break of any story is how well I relate to the characters, and this is where this one fell short for me. Taylor’s life choices and decision-making felt alien to me, and ultimately cost me my connection to the story. That’s not to say that I didn’t feel like throttling Angus myself, I would just have gone about it a bit differently!  However, whilst it may not have been my cup of tea, I am sure that it will make a fun romp into the world of a woman scorned for many readers, so if the concept of the story appeals to you, you should give it a go! In any case, an impressive debut and I look forward to reading more from this author in future.

Thank you to Netgalley and Simon & Schuster Australia for the free electronic copy of this novel and for giving me the opportunity to provide an honest review.

The Perfect Girlfriend by Karen Hamilton
Posted by but books are better at 20:41