Audiobook Review: TAKE ME IN by Sabine Durrant 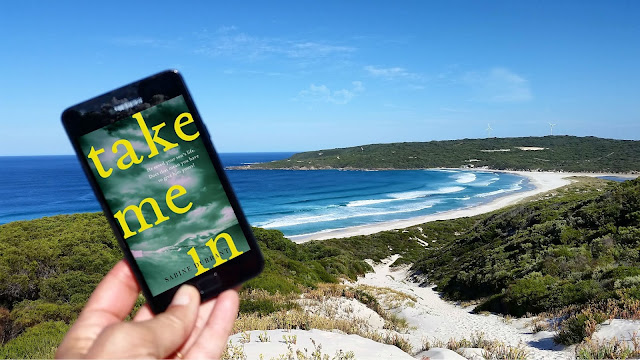 A hot beach. A young family on holiday. A fatal moment of inattention...

And now Dave Jepsom is in their lives. Dave Jepsom, with his muscles, his pale eyes, his expressionless face.

He saved their child. How can they ever repay him? Especially as what he seems to want in return is everything.

He's in the streets they walk down. He's at the office where they work. He's at their front door, leaning on the bell...

If only they could go back. Back to when the lies were still hidden. Before the holiday, before the beach, before the moment that changed everything.

But it's never how it starts that matters. It's always how it ends.

I loved Durrant’s last book, Lie With Me, so Take Me in was one of my most anticipated new releases of 2018. Again, we have a really intriguing premise here: couple Marcus and Tessa are on holidays in Greece when their young son, Josh, falls into the ocean whilst his parents are distracted. It is only thanks to the rapid actions of a bystander, Dave Jepsom, that the boy is saved from drowning. Although Marcus and Tessa are grateful to the stranger for his intervention, they become wary of him when he makes repeat appearances in their lives once back in England. Soon Dave becomes a sinister spectre in their lives and a constant reminder of their guilt and inadequacies – ultimately bringing this little family to the brink of disaster.

I loved the idea of the story, which unfolds through both the POVs of Marcus and Tessa, a well-off successful couple who at first glance seem to have it all. It’s not until the story progresses that we learn that their marriage is far from perfect. Durrant has a knack for delivering flawed, somewhat unlikeable characters that still manage to extract some empathy from my cold, cold heart, even though neither Marcus not Tessa could hold a candle to Paul Morris from Lie With Me, and I admit feeling quite frustrated with them on several occasions. Here we have two people who seem to have it all, and yet they are basking in constant dissatisfaction and self-centredness. Little Josh really has to take a backward seat as his parents bumble from one disastrous decision to another, each so wrapped up in their own misery that they have little time for playing happy families. And then there is Dave Jepsom, who inserts himself in their lives like a big fat cuckoo in another’s nest, hovering in the shadows like a menacing premise that seems to pre-empt their unravelling. Like Marcus and Tessa, I was constantly wondering if Dave could really be responsible for all the misfortune that befell them, or whether it was all in their imagination. Hero or villain? Friend or foe?

With this brilliant premise I am somewhat disappointed that the book ultimately did not fully deliver for me. There was so much potential for this story to be truly chilling and heart-poundingly tense, but it never seemed to exploit all the possibilities the author hints at. It is difficult to describe my feelings without giving away parts of the plot that may spoil things for other readers, but I can say that I felt that too much time was spent on intricate details of Tessa and Marcus’ everyday lives (and Marcus’ work), and not enough on the chilling spectre of Dave hovering in the peripheries. There were a couple of moments when I thought that the book would finally get to the point (e.g when Tessa calls Maureen and finds out some chilling facts about Dave) and utilise this aspect to ratchet up tension, but it never fully got there.  Considering the finale of Lie With Me, I was breathlessly waiting for the final reveal to throw me a big curveball, but found that I could see its trajectory from a mile off, and it ultimately disappointed. To be totally honest, I felt that the ending didn’t fit at all, and left me feeling dissatisfied, with many questions left unanswered.

In summary, and after much soul-searching, I sadly concede that despite Durrant’s writing style (which I still love), Take Me In was ultimately disappointing for me. I felt that this book had so much more potential to be great, but the narrative got lost in translation somewhere along the way and turned out to be more of a casual stroll around the block than the heart-pounding thrill ride it could have been. Whilst I enjoyed Durrant’s keen observations of a modern, middle-class marriage and the smoke and mirrors of suburban life, including the couple’s friends (who were as unlikeable and deceitful as the couple themselves), it ultimately read more like a relationship drama than a heart pounding psychological thriller. I still liked the story, but I did not love it as much as I thought I would.