Book Review: IN THE VINES by Shannon Kirk 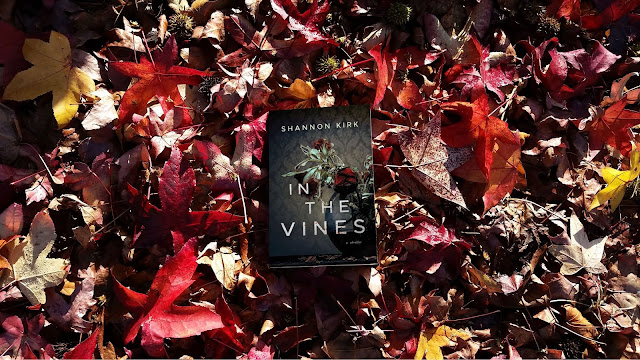 Mary Olivia Pentecost, known as Mop, was born into one of the wealthiest families in the country—and one of the most guarded. Now, two years after her mother’s mysterious death, Mop is seeking closure on the disquieting tragedy by returning to the New England seaside estate of her cloistered Aunty Liv—once her closest relative and confidante.

But behind the walls of the isolated estate, the shadows of the past are darker than Mop imagined. The puzzles of the family history are not to be shared, but unearthed. With each revelation comes a new, foreboding threat—and for Mop, the grave suspicion that to discover Aunty Liv’s secrets is to become a prisoner of them.
How well do we know the people we love? How well do we wantto know them? The answers are as twisted as a tangle of vines in this throat-clutching novel of psychological suspense.

Woah! What a crazy ride this book was! I think I spent a majority of time with a dazed, “What the ...????”  look on my face, not quite sure what I had let myself in for. There is A LOT of crazy stuff going on with this story, told through two different POVs and quite a few separate timelines, and I admit it took me a little while to get my bearings.

In the present, we have Mary Olivia Pentecost, better known as Mop, who is being chased through the bush by a crazy woman with an axe. Whilst trying to survive this frantic attack, Mop reflects on the events that have led to her current predicament. We also hear about those from her “Aunty” Liv’s POV, starting with an encounter in a diner two years ago, which set some pretty crazy events in motion. Even if I wanted to sum this story up for you, I would not know how to put the kaleidoscope of frantic images it painted in my head into words. Such was the impact of the story that I felt slightly crazed myself and had to ingest this in small doses – certainly not before bed, when the chaotic images would filter into my dreams (or nightmares). What a fantastic, trippy movie this book would make!

Kirk has a unique voice like no other I have come across, her words tumbling across the pages with an urgency reflecting the actions and thoughts of her characters, which are not always “sane”. This is not your typical thriller with people thinking in a logical and calculating manner, but a thrill ride of emotions that mirror a disturbed mind. So vivid were the pictures she evoked that the final scenes will stay in my memory as some of the most disturbing and thrilling I have come across in a thriller. Perhaps I should sit with this for a while and let it digest rather than pound out my review whilst still reeling with shock and disbelief, but it was that kind of book!

Apart from characters that leap from the pages like spectres from a horror movie, Kirk manages to serve up the perfect claustrophobic and atmospheric setting on a rather grand coastal estate in New England. I have never been there, but could picture the lush gardens perched atop towering cliffs so vividly that it made for armchair travel of the best kind. The idyllic setting is in such a stark contrast with the crazy minds of the characters, that it offers a fleeting but deceitful relief from the actions playing out, but do not be fooled, because it will also host the most horrific scenes of the story!

Now, I am a reader who struggles with suspension of disbelief, and there were a few moments when it almost crossed the line for me, but “Aunty” always managed to have a perfectly reasonable explanations for even the craziest stuff that went down. So who am I to argue? I certainly wouldn’t take on this formidable woman, for reasons that will become evident as soon as you read this book. Liv is a nurse, and she knows plenty of ways to dispose of an enemy, so tread lightly here, dear reader! Sorry, Aunty, I really didn’t mean anything by it, I’ll keep my mouth shut now *shuffles off quietly into a corner*. So if you’re game, go and read it for yourself and let yourself be carried away into the crazy world of In the Vines!

Thank you to Netgalley and Thomas & Mercer for the free electronic copy of this novel and for giving me the opportunity to provide an honest review.