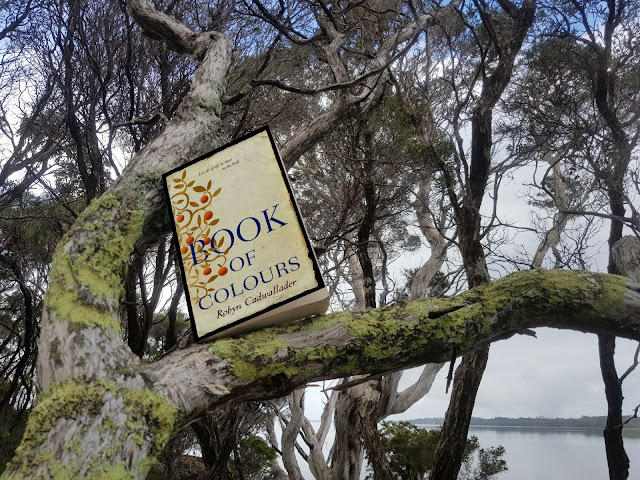 London, 1321: In a small stationer's shop in Paternoster Row, three people are drawn together around the creation of a magnificent book, an illuminated manuscript of prayers, a Book of Hours. Even though the commission seems to answer the aspirations of each one of them, their own desires and ambitions threaten its completion. As each struggles to see the book come into being, it will change everything they have understood about their place in the world. In many ways, this is a story about power - it is also a novel about the place of women in the roiling and turbulent world of the early fourteenth century; what power they have, how they wield it, and just how temporary and conditional it is.

Rich, deep, sensuous and full of life, Book of Colours is also, most movingly, a profoundly beautiful story about creativity and connection, and our instinctive need to understand our world and communicate with others through the pages of a book.

I really love a good historical novel but often hesitate picking one up because they can be hit and miss for me. To make it a great read, the author not only needs to be well informed about the era, but also have the skills of creating vivid characters and an atmospheric setting to facilitate the perfect time travel experience. Not an easy task (and I am not picky at all – lol)! I am happy to say that Robyn Cadwallader has those superpowers, which made this book a wonderful reading experience, and I am mad at myself for letting this sit on my shelf for so long!

The medieval times have always held a special fascination for me, and Book of Colours is set in the dark times of 14th century Britain. At the time, persistently cool and wet weather conditions made crops fail and led to one of the biggest famines in Britain’s history, causing a huge increase in disease and a death toll of up to 25% of the population. On top of the natural hardships, there was crime, war and unrest to contend with, and unemployment was rife.  Whilst some people still believed the church’s claim that it was “the will of God”, others began to question their faith and reliance on a seemingly cruel God. With the creation of her unforgettable characters, Cadwallader manages to not only capture this atmosphere of upheaval, but also the mindset of the people during those difficult times– and yet it remains a story of hope and survival, which left a warm glow in my heart.

Anyone with a love for books and art will appreciate the intricate details Cadwallader shares about the creation of a medieval “book of hours”, a richly illuminated tome of prayers and psalms commissioned by one of the rich landowner’s wives. Cadwallader’s extensive knowledge of the subject becomes obvious as she describes the processes involved in the making of the book: the preparation of the parchment, the mixing of the paints from substances such as bone, plants, urine and precious metals, the processes of carefully constructing the pictures that will do justice to the religious texts. The author’s skill lies in seamlessly weaving these details into a story about the everyday lives of the limners working on the book, each bringing with them their own histories, pasts and secrets that shape their particular style of art. The role of women in medieval society is explored through the character of Gemma, a talented limner from a long line of artists, who – as a female – is not allowed to officially work in her role but must paint under her husband’s name. She rebels against society in her own way, not only by secretly painting in the book of hours but also by writing a book on the art of illumination for her son, an apprentice limner, which was so interesting that I couldn’t get enough of it!

I was so fascinated by Cadwallader’s descriptions that I spent hours googling images of books of hours, remembering seeing them on visits to museums in Europe, where they still offer valuable glimpses into this distant past. The artwork in some of them is incredible, and I could appreciate the many months the fictional limners spent on illustrating Lady Mathilda’s book. With the beauty of the artwork offset against the harsh environment and living conditions, I felt instantly transported back into history – not only immensely enjoying this virtual time travel, but also learning so much along the way. I am so infinitely grateful that owning books is no longer just a privilege of the rich! I also loved the despair of those tumultuous times reflected in small details Cadwallader includes in her story, such as the supernatural element of the gargoyle following Will’s every footstep as a symbol of his demons.


In summary, if you appreciate a well-written historical novel brimming with fascinating detail of the era, then I strongly recommend this book! Personally, I loved every step of the journey and I feel that I have learned a lot about medieval art that has given me a whole new appreciation for the courage of our ancestors finding beauty despite hardship, and gratitude for all the privileges we take for granted today – especially books.


You may also enjoy:

The Hours, by Minette Walters