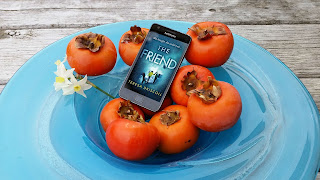 On a train with her husband, miles from home and their four-year-old son, Ben, Sophie receives a chilling phone call. Two boys are in hospital after a tragic accident. One of them is Ben.

She thought she could trust Emma, her new friend, to look after her little boy. After all, Emma’s a kindred spirit—someone Sophie was sure she could bare her soul to, despite the village rumours. But Sophie can’t shake the feeling that she’s made an unforgivable mistake and now her whole family is in danger.

Because how well does she know Emma, really? Should she have trusted her at all?

Time is running out. Powerless to help her child, still hours from home, Sophie is about to discover the truth. And her life will never be the same.

I came across The Friend accidentally on Audible and it sounded too good to miss – a child in danger, a friend who is not who she seems, secrets, lies, a race against time. Just what the doctor ordered for my daily commute, I thought!

Driscoll’s writing drew me in rapidly and I really enjoyed the dual time format of the novel. Here we have Sophie, a young mother on a train who gets a phone call that her four-year old son Ben has been hurt in an accident and is being rushed to hospital as they speak. Straight away the alarm bells ring: What has happened and why is her son not with her? He is with a friend, we learn, a friend who had been trusted to take care of him, but who Sophie now doesn’t want anywhere near her child. Why? WHY? Dricoll knows how to build tension, and she had me on tenterhooks as I was listening, eager to find out more. It’s the second timeline which slowly explores the past to give us all the answers and outline the events leading up to Sophie’s current predicament, and a chilling tale it is!

For the first ¾ of the novel I was totally hooked, enjoying Driscoll’s portrayals of her characters and the underlying air of danger and menace that is ever present in the friendship between Sophie and newcomer Emma. I also liked the characters of Melanie and Matthew, who I found out had made an appearance in an earlier novel by the author (and which I must read). A few unexpected plot twists spiced up the story, and there is even a murder to enhance the sense of danger in the village. Up to almost the very end I loved the story and couldn’t get enough of it.

However, I felt that the ending was a huge let-down for me. Not only did it all end rather abruptly, but a lot of the loose threads are explained in a lengthy epilogue that is telling rather than showing and appeared rather dry to me, even though I appreciated the efforts the author made to answer all outstanding questions. There were also some huge plot-holes for me in regards to the final twist, which from a nurse’s point of view seemed farfetched, spoiling the previously well-constructed and believable narrative at the 11th hour. I felt frustrated and cheated at this turn of events, which most likely won’t bother a vast majority of readers, so unless you are a health-professional you should be safe in reading it and enjoying the final big reveal. Whilst I felt like flinging the book (i.e. my phone, as I was listening to the audio version) out of the car window, uttering a guttural cry and rolling my eyes so far into my head that I was probably a traffic hazard!

In summary, The Friend is a chilling story of a friendship gone wrong, with a few unexpected twists along the way. It can be safely read by most, except for health-professionals who find it difficult to suspend disbelief for the sake of entertainment (hold on to your phones, people!). Having really enjoyed Driscoll’s writing style and the characters of Melanie and Matthew, I will undoubtedly look up her previous novel to go back to their beginnings.