Book Review: IN THE DARK by Andreas Pflüger 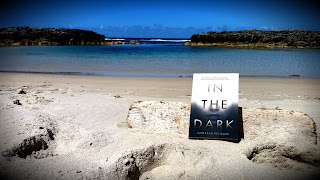 Jenny Aaron was once part of an elite police unit tracking Germany's most dangerous criminals. She was the best. Until it all went wrong. A disastrous mission saw her abandon a wounded colleague and then lose her sight forever.
Now, five years later, she has learnt to navigate a darkened world. But she's still haunted by her betrayal. Why did she run?
Then she receives a call from the unit. They need her back. A prison psychologist has been brutally murdered. And the killer will only speak to one person...

I am always keen to read about protagonists that stand out from the rest, so was very interested to meet Pflüger’s Jenny Aaron. How ambitious, I thought, to cast a blind woman as a highly trained police interrogator, who chases down a serial killer. Ambitious – perhaps. But Pflüger has certainly done his homework, and somehow a blind detective works, especially since Aaron has come to train other senses to such an extent that she is able to function quite efficiently without the sense of sight that most of us are totally reliant on. I found Pflüger’s descriptions of Aaron’s special skills fascinating, especially echolocation, her ability to use sound as a kind of sonar device similar to how bats and dolphins find their way around. Very kindly, Pflüger provides some links to find out more about his research in the postscript, which explained the skills in more detail and were certainly an “eye-opener” (pun intended) for me!

To get back to the book, here we have Jenny Aaron, who is basically an indestructible machine – super intelligent, highly skilled and afraid only of her own failings. Picture a type of female Jack Reacher. Noone messes with Aaron and gets away with it. Whilst being blinded in the line of duty may have slowed her down slightly, she has bounced back with a vengeance, even beating some of her colleagues at the shooting range. So catching a serial killer should not present much of a challenge to Aaron, except when the killer is just as ruthless, intelligent and fearless as she is. There is also a great cast of supporting characters, which at times held more interest for me than Aaron herself, especially the equally clever and fearless sniper  Pavlik. And strangely the killer, Holm, was so compelling that I yearned for a “let’s all be friends and live happily ever after” ending.

In the Dark is an action packed thriller that will have you at the edge of your seat many times. I imagine a few casualties amongst the stunt crew if there ever is a film version – especially scenes where the blind Aaron must balance on the tow bar of a truck to escape her captors; or swim against the strong pull of a ship propeller in freezing water to save her life. Yes, there is a strong degree of having to suspend disbelief, but this is an action thriller, so this is almost a no-brainer. In fact, I would be surprised if no one snaps up the movie rights to this book, as it would make a fantastic film. It is certainly a story that will appeal to a wide audience, containing not only a solid murder mystery, but also the kick-ass action packed elements of a thriller.

Ok, now to the things that didn’t work for me – and mind you, I had a preview copy of the book that had a few formatting issues, which didn’t help. But I felt that in parts the book was too long and convoluted and could have done with some paring down. The large number of characters, some of which appeared under several names (family name, first name, nick name) didn’t help and I did a lot of flicking back and forth to find my bearings. With several plots and timelines intertwined throughout the book with little to distinguish them, it was easy to get lost and disorientated to person, time and place. Aaron’s inner dialogue, in which she reflects on her past experience in Barcelona, constantly cut into the current plot to a degree where it interrupted the smooth flow of the story. Perhaps some of these issues are related to the translation from German, but I felt that the 446 pages could have been edited down a bit to put more emphasis on the focal story. Seeing that this is the first book of a trilogy (I believe), some of these issues may naturally get ironed out as the characters evolve and grow. I am certainly interested in seeing this die-hard cast back in a new setting and look forward to Book 2!

Thank you to Netgalley and Head of Zeus for the free electronic copy of this novel and for giving me the opportunity to provide an honest review.