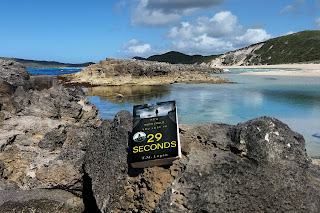 I went into this story totally blindly, only lured by the intriguing title, and am glad that I did. 29 seconds of what? The clock is ticking .... I will try to write this review without giving anything away, since this story very much relies on its original premise and the surprises it holds in store  - and this is also the reason I am not giving a book description here (if you absolutely want one, you will have to google this book, but be mindful that the blurb contains huge spoilers).

Our main protagonist is Sarah, an accomplished academic in her early thirties, whose career is being thwarted by members of the “old boys club” at the university she is working at. Her boss is a sexual predator of the worst kind, lording his power over all female employees and exploiting his position to garner sexual favours. All the women know it, but unless they want to jeopardise their careers they feel powerless to do anything about it. The last woman who lodged a complaint with HR lost her job, her reputation and her sanity. Sarah, who has been hoping for a well-earned promotion, has so far successfully avoided being in that position, but lately the man has made it clear that he expects some favours from her as well. How can she say no and still keep her job? Who can she turn to when everyone is in his pocket? Something needs to be done. And sometimes help comes from the most unexpected direction ....

Logan does well to get the reader emotionally involved in the story, and I felt an intense burning anger a few pages into the book, as it becomes clear that Sarah has her back against the wall. Slowly stoking the fire with mounting injustices, the story may have been off to a bit of a slow start with its direction a bit unclear – until BAM! – there it was, the big twist that made the story both original as well as very intriguing. With my boiler already on full red alert I experienced the same gut reaction Sarah must have felt when confronted with her unusual situation. And just to make it all more interesting, there are a few ethical dilemmas along the way. Have I wetted your appetite yet? No, I will not say any more about the plot, except that the 29 seconds of the title may change Sarah’s life. 29 second of what? You will have to read it to find out. It does rely a tiny bit of the reader’s ability to suspend disbelief, but then again, we live in a strange world where strange thing happen, so who says it’s not possible?

29 Seconds may be a bit of a slow burner at the start, but don’t be fooled – this is a very clever and original thriller that will have you questioning a few ethical and moral dilemmas along the way. It took a few unexpected turns that had me on edge, wondering how it would turn out in the end – and then I was still wrong with my guesses. This is the perfect book to pick up if you want a thriller with an original premise and some surprising twists!

Thank you to Netgalley and Bonnier Zaffre for the free electronic copy of this novel and for giving me the opportunity to provide an honest review.
Posted by but books are better at 20:15