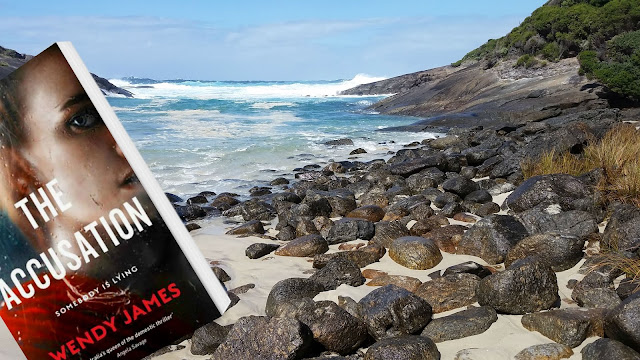 Title: THE ACCUSATION
Author: Wendy James
Publisher: HarperCollins Australia
Read: May 2019
Expected publication: out now
My Rating: 🌟🌟🌟🌟🌟 all the stars!

Eighteen-year-old Ellie Canning is found shivering and barely conscious on a country road, clad only in ill-fitting pyjamas. Her story of kidnap and escape quickly enthrals the nation: a middle-aged woman with a crazy old mother has held Ellie in a basement, chained her to a bed and given her drinks from an old baby's sippy cup. But who was this woman and what did she want with Ellie? And what other secrets might she hide?

When the accusation is levelled at local teacher Suzannah Wells, no one seems more bewildered than Suzannah herself ... to start with. The preposterous charge becomes manifestly more real as she loses her job and her friends. And the evidence is strong: a dementia-affected mother, a house with a basement, a sippy cup that belonged to her long-dead daughter. And Ellie Canning's DNA everywhere. As stories about Susannah's past emerge, even those closest to her begin to doubt she's innocent.

And Ellie? The media can't get enough of her. She's a girl-power icon, a social-media star. But is she telling the truth?

A powerful exploration of the fragility of trust, and the power of suggestion, from the author of The Golden Child and The Mistake.

It’s been a while since a book has kept me up late into the night, but I was so entranced with this one that I read it in one day and couldn’t tear myself away until all was revealed. Anyone who knows my obsession with getting enough sleep will know that it takes a special kind of story to have that sort of power over me!

Darn, this book was good! From the very first page, I was totally and utterly hooked. I’m not sure if it was the premise of the story, or the characters, or a combination of both, but I felt that James really touched the very core of me, like  a fisherman using the perfect bait to catch his dinner. I will be very careful not to give anything away here, but basically the story revolves around an eighteen year old girl who claims to have been abducted by a middle-aged woman and her crazy old mother and held hostage in their basement for weeks before being able to escape. Being a small town, the pool of suspects is limited, and soon suspicion fall upon highschool drama teacher Susanna and her mother Mary, who live in an old farmhouse just out of town. Suzannah denies ever having laid eyes on the girl, and yet Ellie seems to know a lot of details about the house and the couple of older women. So who is telling the truth, and who is the liar?

This was a story of a thousand theories – the unreliable narrator theme as its best. I really liked Suzannah and wanted to believe her, but Ellie also makes a convincing case against her. My imagination soon started to run riot. S was guilty, S was innocent, S had multiple personalities, S had an identical twin, aliens had landed in the yard and taken possession of S’ body to commit the crime. One of those surely had to be right! But no matter whether either was right or wrong, here we have the media and the public who have already elevated the young pretty Ellie to celebrity status and condemned the two reclusive women as being the guilty party.

To say I loved James writing style is an understatement – I was mesmerised. Both the setting and the characters came to life for me, painting vivid pictures in my mind and playing out movie like in front of my eyes. I particularly enjoyed the character of Mary, Suzannah’s mother, who suffers from a type of dementia and is extremely eccentric. Whilst Mary would undoubtedly be quite hard work to look after in real life, here she livened up the story and added not only a bit of humour but an additional thread to sow doubt in the reader’s mind. Do her crazy ramblings contain some truth?

I can firmly say that THE ACCUSATION  is one of the best psychological thrillers I have read this year, and features amongst other greats of Australian crime fiction to have hit our shelves recently. There is a special quality to Australian mysteries that captures the effects of a vast and isolated land on the human psyche, and ratchets up tension. James has used all of these elements with perfection to create a tense, claustrophobic atmosphere that kept my heart rate up and my mind churning in an effort to solve the mystery.

If you like a good psychological thriller, then you cannot go past this one. I was even more intrigued to learn that the story had been inspired by a true 18th century crime, which gives it additional depth and meaning. Giving the historical “Canning Affair” a 21st century setting, with the ensuing media circus and social media storm, was a clever way to bring this old mystery back to life.  THE ACCUSATION  is Australian crime writing at its best, showcasing the great talent of Australian women writers out there today. It deserves all the hype! A brilliant book, very highly recommended.