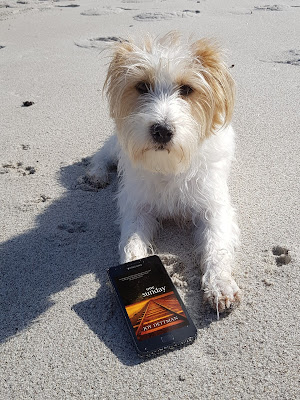 Early one Sunday, the town of Molliston wakes to the news that a young bride is dead. The year is 1929. The Great War with Germany has been fought and won, but at an immense cost to the small community.

Racial hatred is like a bushfire in the belly of some. And the dead girl is found only yards from the property of old Joe Reichenberg, a German. Tom Thompson, the local cop, lost his two sons in Gallipoli. He believes he has come to terms with his bereavement - until that Sunday.

Slowly, the true face of Molliston is exposed. By midnight, a full moon is offering its light - and a glimmer of hope.

What attracted me to this book:

I think I must have been living under a rock, because it has taken me this long to discover Joy Dettman’s books! Aussie author, Aussie setting, time travel to the 1920’s – all the things I love in a book, and yet I had never stumbled across this one before now.

Let me tell you, if you love historical fiction set in Australia, then you are in for a real treat. ONE SUNDAY is chockablock full of themes that make for a ripper of a story. Soldiers returning to Australia from WWI, some disfigured, some traumatised, but all with scars of their own, trying to resume lives that had been stolen from them. Small country towns which have lost a great number of their sons, lovers, husbands, fathers to a war on a distant shore. Grieving families, madness, sadness. Hatred of Germans and everything that is of German origin. Small town gossip, politics, feuds and alliances. Domestic abuse, cruelty. Teenage pregnancy. A doomed romance between feuding families. And in the centre of it all a murder: who killed young beautiful Rachel Squire?

ONE SUNDAY had everything I love in a good story, and Dettman is a master story teller to boot. With well rounded, real life characters and interpersonal dynamics that painted the book’s rich cast vividly in my mind, I was invested in each and every one of their stories – and there are lots of them! This book was as addictive as a soapie, and I could not wait to find out all the answers. But most of all, Dettman offers us an observant snapshot of post war Australia with all its problems and lasting scars. There isn’t a character who hasn’t been affected by the war, even though it had been fought on a distant shore. But the loss of so many fine young men has left a huge toll on the whole community and has divided it in ways that had never been an issue before. Those who did return are never the same again. The wounds have stoked the fire of racial hatred, and suddenly the love between Rachel Squire and Christian Reichenberg is taboo.

Tom Thompson, the town’s cop, who is facing his own battles trying to look after his “crazy” wife and mourning the loss of his two boys, is faced with solving Rachel’s murder. In a town where hatred runs so deep, were each and every one has something to hide, it won’t be easy ....

I must also give credit to Deirdre Rubinstein, the narrator of this lengthy audio book, who did an absolutely outstanding job in bringing each and every character to life for me., making this one of the best audio book narrations I have ever listened to.

In summary, ONE SUNDAY may have been the first book I have ever read by Joy Dettman, but it won’t be the last. I have already picked up one of her Woody Creek series and am looking forward to losing myself in more of her brilliant writing. ONE SUNDAY is Australian fiction at its best, giving an insightful snapshot of small town Australia in the 1920’s. It doesn’t get much better than this.