Book Review: AFTER SHE WROTE HIM by Sulari Gentill 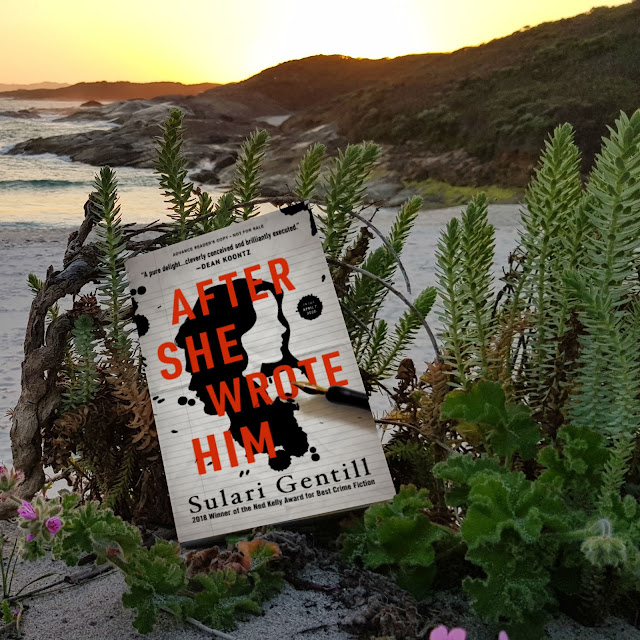 
“Perhaps telling lies is the only way to find the real truth.”

Madeleine d'Leon doesn't know where Edward came from. He is simply a character in her next book. But as she writes, he becomes all she can think about. His charm, his dark hair, his pen scratching out his latest literary novel . . .

Edward McGinnity can't get Madeleine out of his mind--softly smiling, infectiously enthusiastic, and perfectly damaged. She will be the ideal heroine for his next book.

But who is the author and who is the creation? And as the lines start to blur, who is affected when a killer finally takes flesh?

I have always been irresistibly drawn to the “book within a book” concept. AFTER SHE WROTE HIM, however, takes the whole idea one step further, because here we potentially have two books within a book, and no idea which one is reality and which one is fiction. If this totally confuses you, then hey – give it a go! It certainly was one of the most original, intriguing ideas I have ever come across, and it really messed with my mind.

Madeleine D’Leon is a lawyer and a crime writer of a detective series that has been selling well and has many followers. One day, despite her agent’s misgivings, she has an idea for a different type of story. It all starts with Edward, her main protagonist, who appears to her out of the blue and quickly takes on shape in her imagination. As she writes her story and orchestrates his fate, the picture of him in her mind becomes more vivid, until he is almost as real to her as a flesh-and-blood person.

Edward McGinnity is a writer of contemporary fiction. One day he has an idea for a story involving a main character who is a crime writer. He calls her Madeleine. As he writes and orchestrates her fate, her picture becomes clearer in his mind, until she is almost as real to him as a flesh-and- blood person.

Do you see where this is headed? Exactly! Now, who is the writer and who is the fictional character?

Gentill introduces some very interesting topics here that really made me think. One particularly pressing question was Madeleine’s dilemma – with Edward becoming almost a friend to her (even though he is her fictional character), she feels guilty throwing him into some nasty situations in her crime story. As a writer, she becomes the orchestrator of his fate, dictating his life by the whims of her imagination. Fascinating!

As the story progressed, I felt more and more unsure of the line between reality and fantasy, a battle both Madeleine and Edward face. This blurring of the boundaries between what is real and what is imagined, sanity and madness, is something I really enjoy in a thriller, especially if it is as cleverly handled as in this book. As we get sucked deeper into Madeleine’s and Edward’s worlds, the story took on an almost dream-like quality where the borders were no longer clearly defined, a real challenge for my analytical mind!

AFTER SHE WROTE HIM was originally published under the title CROSSING THE LINES, which I thought was a title that perfectly sums up the book! This clever, original and thought provoking mystery will appeal to people who enjoy thrillers that dare to blur boundaries, step into uncharted territory. Caution to readers who don’t enjoy alternating POVs that swap and change frequently, even within the same chapter. Personally, I thought that it added to the story, showcasing how the two characters become more and more enmeshed, but I think you should be aware. This was the first book I read in 2020, and as we say in Australia – what a ripper!


Thank you to Netgalley and Poisoned Pen Press for the free electronic copy of this novel and for giving me the opportunity to provide an honest review.