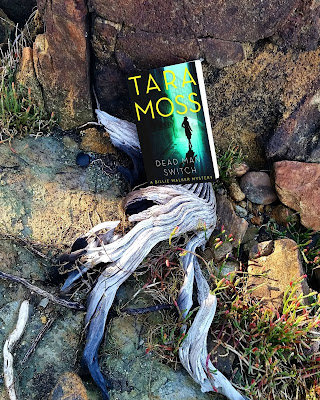 Sydney, 1946. Billie Walker is living life on her own terms. World War II has left her bereaved, her photojournalist husband missing and presumed dead. Determined not to rely on any man for her future, she re-opens her late father's detective agency.

Billie's bread and butter is tailing cheating spouses - it's easy, pays the bills and she has a knack for it. But her latest case, the disappearance of a young man, is not proving straightforward ...

Soon Billie is up to her stylish collar in bad men, and not just the unfaithful kind - these are the murdering kind. Smugglers. Players. Gangsters. Billie and her loyal assistant must pit their wits against Sydney's ruthless underworld and find the young man before it's too late.

Every now and then, I really love a good PI story, and the combination of plucky female protagonist and historical setting in post-war Sydney made this one an irresistible temptation for me! As we got introduced to Billie Walker, I got definite Kinsey Millhone vibes here (from Sue Grafton’s Alphabet series) – an independent smart woman protagonist in a man’s world, investigating the “old fashioned” way, without the help of internet or databases and the like.

I’ve read a few of Moss’ novels and like her writing style, which beautifully brought post-war Sydney to life for me. That I couldn’t fully connect to Billie is probably a case of “it’s not you, it’s me”, and seeing that this is the first of the series, a bond may yet develop later. At times I just felt that Billie’s role as independent PI did not quite gel with the general role of women at the time, a struggle that she may well have overcome but which did not really shine through for me. Perhaps I would have found it more credible had we learnt more about her humble beginnings working for her father (or someone else), than emerging as a fully fledged emancipated woman who just didn’t quite match my impression of the post-war era woman for me. As it was, I found it difficult to get into her head and to understand what motivated her to act the way she did.

Saying that, if you like a good detective story with some old fashioned sleuthing and following the clues to get to the answer at the same time the main character does (without the killer twist you will never see coming), then this is the sort of book that should be on your reading list. Post-war Sydney makes a great backdrop against a colourful cast of characters who complimented Billie’s quest to find a missing seventeen-year-old boy.

All in all, whilst I did not fully connect to the main character here, I am intrigued by this new series, especially its post-war Sydney setting, which will see me coming back for further instalments in future. Moss writes well and I look forward to Billie Walker’s next case in the hope she will grow on me just like Kinsey did all those years ago.


If you enjoyed the post-war Sydney setting, make sure to check out this series:

The Digger's Rest Hotel, by Geoffrey McGeachin
Posted by but books are better at 11:06