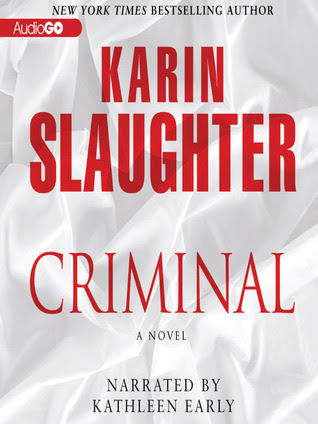 Will Trent is a brilliant agent with the Georgia Bureau of Investigation. Newly in love, he is beginning to put a difficult past behind him. Then a local college student goes missing, and Will is inexplicably kept off the case by his supervisor and mentor, deputy director Amanda Wagner. Will cannot fathom Amanda’s motivation until the two of them literally collide in an abandoned orphanage they have both been drawn to for different reasons. Decades before—when Will’s father was imprisoned for murder—this was his home. . . .

Flash back nearly forty years. In the summer Will Trent was born, Amanda Wagner is going to college, making Sunday dinners for her father, taking her first steps in the boys’ club that is the Atlanta Police Department. One of her first cases is to investigate a brutal crime in one of the city’s worst neighborhoods. Amanda and her partner, Evelyn, are the only ones who seem to care if an arrest is ever made.

Now the case that launched Amanda’s career has suddenly come back to life, intertwined with the long-held mystery of Will’s birth and parentage. And these two dauntless investigators will each need to face down demons from the past if they are to prevent an even greater terror from being unleashed.

A masterpiece of character, atmosphere, and riveting suspense, Criminal is the most powerful and moving novel yet from one of our most gifted storytellers at work today.


“Criminal” is another taut and terrifying thriller in the style and quality we have come to expect from acclaimed author Karin Slaughter, and like her other novels this one does not disappoint. Although the latest in the Will Trent series, the story’s dual time format explores the early beginnings of Will Trent’s life, from the circumstances which saw him orphaned to his dyslexia and the complex origins of his relationship with his boss Amanda Wagner.

As Will Trent’s relationship with widowed paediatrician Dr Sara Linton becomes more serious, he takes Sara to the abandoned and dilapidated building of the Atlanta Children’s Home to show her the place where he spent most of his childhood. The couple are surprised by the sudden arrival of Amanda Wagner, lead investigator with the Georgia Bureau of Investigation and Will’s boss, when she storms into the building armed with a hammer, refusing to answer any of Will’s questions. Will suspects that her presence is linked to the investigation into the recent disappearance of a young female Georgia Tech student, a case Amanda has been keeping him away from by banishing him to airport duty for the small misdemeanour of wearing his hair too long. As she enters the steps leading into the basement, the old rotted wood gives way, sending her and the whole staircase crashing into the darkness. Suspecting the worst, Will climbs down after her, finding Amanda bleeding and dazed. In the few moments before the paramedics arrive, Amanda makes a startling confession, which will turn Will’s life upside down and brings back ghosts from the past he thought he had laid to rest.

In a parallel storyline, the novel skips back 30-odd years, to the time when a young Amanda Wagner and Evelyn Mitchell are working as plain-clothes detectives in the sex crimes division of the Atlanta PD. Constantly battling against discrimination from their male counterparts in the force, as well as the general perception that women are not suited to proper police work, the two women face fierce opposition when they start to look into the disappearance of three young prostitutes, especially when their informant dies in an supposed suicide. All women share similar characteristics – they are young, blonde, pretty and drug addicts. Drawn into a dark underworld of prostitution and the drug trade, the two officers risk their own lives and careers to bring justice to the missing girls, which they suspects have fallen prey to a serial predator.

Slaughter also grants insight into the victims’ fates by giving some of them a voice, adding a chilling and dark element to the novel which is not for the faint hearted. When a link between the early crimes and the present disappearance is revealed, it starts off a race against time to prevent any more lives being lost.

I have been an avid reader of Karin Slaughter’s novels for some time now, and soon became hooked on this latest instalment in the Will Trent series. For readers new to Slaughter’s writing, I do recommend starting the series from the beginning before attempting to read “Criminal”, as the characters and the storyline are complex and skilfully crafted, and it will make much more sense with a firm foundation of background information from previous novels. Personally, I loved finding out details about Will Trent’s history, as many questions about his childhood were finally answered.

Slaughter’s books are not for the faint hearted – some of the details in “Criminal” are truly horrific and mind-boggling, enough to give fuel to your worst nightmares. I listened to the audio book version of the novel, and often found myself holding my breath in terrified anticipation, or wincing in horror as the gruesome details of the victims’ fates are revealed. And yet I could not tear myself away and sat in my driveway long after returning home, unable to switch off the CD before finding out what had happened. The details of the sexual discrimination rife in the police force in the 1970’s was mind boggling, seeing that this was not all that long ago – my mother’s generation.

The dual time frame of the novel worked well for me, providing two very separate storylines which came together in the end in a terrifying finale and with an unexpected final twist I absolutely did not see coming. By weaving together the past and the present, Slaughter brought her characters to life, giving them not only a personal history but also very unique personalities and explanations for their decisions throughout the whole series. It is due to the author’s great skill that Will, Amanda and Sara became as real to me as flesh-and-blood counterparts – and I am craving to read the next book in the series.

My only criticism has more to do with the media I chose than the actual story – due to the many characters involved and the multiple timeframes, I sometimes found it hard to keep track of all the names and places mentioned in the book. If I were to read this book again, I would probably choose the print version for that reason. Having said that, the novel certainly made my commute to and from work a lot more interesting, and kept me awake late at night after a long tiring shift, so I’m not complaining!

I read this thriller for my 2013 Audiobook Challenge.